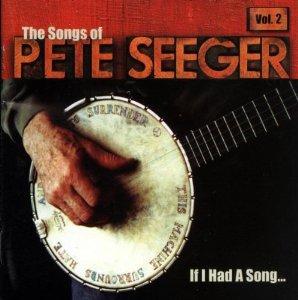 The 2nd volume of Appleseed Recording's "Songs of Pete Seeger" series is a singleCD. It includes cuts by Joan Baez, Dar Williams, Jackson Browne, Arlo Guthrie. There is good reason why this CD is our son Nate's favorite of this series: the songs are powerful, fresh and carry deep conviction in the voices of the singers. My personal favorite is "The Emperor Is Naked Today-o" - recorded by Dave Carter & Tracy Grammer not too long before Dave's tragic death.

Detailed commentary:
Pete Seeger has embodied the ideals of folk music for more than fifty years. The songs he has written, and those he has discovered and made his own, have helped preserve our cultural heritage, imprinting adults and children with the sounds, traditions and values of our global past and present. A fearless warrior for social justice, Pete’s political activism – from the Civil Rights movement and anti-McCarthyism to resistance to fascism and the war in Vietnam – have become the template for subsequent generations of musicians with something to say about the world. While his frequently unpopular stances perhaps cost him a greater and more superficial popularity through the repercussions of media and performance blacklisting for many years, Pete’s contributions have earned him a Grammy Lifetime Achievement Award, a Harvard Arts Medal, the Kennedy Center Award, the Presidential Medal of the Arts, and even membership in the Rock & Roll Hall of Fame.

If I Had a Song is the second volume of Pete’s original or adapted compositions that were recorded, with rare exception, exclusively for Appleseed by many of his fellow musicians. The first volume, the 2-CD Where Have All the Flowers Gone set released in 1998, contained new recordings by Bruce Springsteen, Jackson Browne & Bonnie Raitt, Roger McGuinn, Nanci Griffith, Judy Collins, Ani DiFranco, actor-director Tim Robbins and many other representatives from the last half-decade of folk music. Widely acclaimed for its scope and execution, Where Have All the Flowers Gone won the American Federation of Independent Music Award as the “Top Independent Release of 1998,” and the duet by Jackson Browne and Bonnie Raitt on “Kisses Sweeter than Wine” was nominated for a 1999 Grammy as “Best Pop Collaboration.”

The 16 selections on If I Had a Song extend the engagingly diverse guest list and wide range of song topics presented on the first volume. A few artists reappear with new contributions (Jackson Browne, this time teamed with Joan Baez for a gorgeous version of “Guantanamera”; Billy Bragg with Eliza Carthy; Kim & Reggie Harris and Magpie), but there are plenty of additional and varied voices represented (as well as Pete’s own, on five selections). Traditional “folkies” and protest singers (Arlo Guthrie, John McCutcheon, Larry Long, Guardabarranco), singer-songwriters (Eric Andersen, Dave Carter & Tracy Grammer, Dar Williams & Toshi Reagon, John Wesley Harding, Kate & Anna McGarrigle, Joel Rafael ), alt.country stars (Steve Earle), pop-rockers (Moxy Früvous), and bluesmen (Corey Harris) all pay their respects to the 82-year-old Pete with imaginative arrangements and song choices. There are songs here that were never previously recorded, and many others that have yet to be reissued on any of Pete’s CDs, only appearing once on long-vanished Seeger LPs. One of the two collaborations between Arlo Guthrie and Pete on If I Had a Song, “66 Highway Blues,” is the first recording of one of the rare co-writing efforts by Seeger and Arlo’s father, Woody Guthrie.

Explore features & content or buy copies of our songbooks - designed to create hope & change through singing.

Using singing to empower, build community & have fun - in lots of different settings

Please join us in our efforts to build a better world through singing.

Buying our songbooks directly from us supports our work! We also sell 3 of Annie's CDs and over 20 Pete Seeger CDs.

Find out about Annie’s music, tours, and recordings